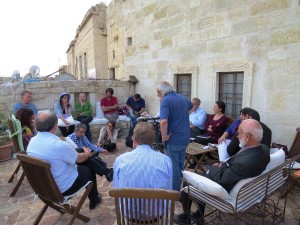 May 3rd – May 8th 2013 seventeen poets and writers from the U.S., Syria, Afghanistan, Pakistan, Turkey, and Iran arrived in Konya, in central Turkey, to participate in The Same Gate conference, centered around the life and work of celebrated 13th century poet Jalal ad-Din Muhammad Rumi, a central poet in Afghan, Arabic, Persian, Urdu, and Turkish literature, and the bestselling poet in America. The conference included discussions, collaborative writing sessions, and visits to museums, shrines, and cultural sites and culminated in a collaborative book of ghazals (a poetic form employed by Rumi), prose reflections, and translations composed by participants as a homage to the spirit of international exchange. Participants met with Esin Celebi Bayru, Rumi’s great granddaughter (21 generations removed), visited the Rumi Shrine and the shrine of his mentor, Shams e Tabris in Konya, and traveled to the southern town of Karaman to explore a village where Rumi once lived with his family. The Same Gate sought to foster greater understanding between Iranian and American poets in particular, building upon the memorandum of understanding signed by the presidents of the University of Iowa and the University of Tehran to increase collaboration between the two institutions. Beirut-based documentary filmmaker Nigol Bezjian recorded the encounter. With Rumi’s poetry as common ground, the project brought poets together to think and talk about poetry and to produce innovative new collaborative work, nearly 800 years after Rumi composed the ghazal that gave The Same Gate its name. –