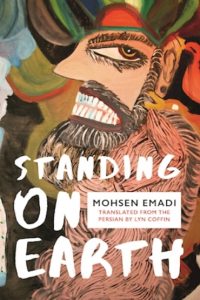 In his poems of memory and displacement, Iranian poet Mohsen Emadi charts his experience of exile with vivid, often haunting imagery and a child’s love of language. Lyn Coffin’s translations from the Persian allow Emadi’s poems to inhabit the English language as their own, as the poet recasts his earliest memories and deepest loves over the forges of being ‘someone who goes to bed in one city and wakes up in another city.’ Alternating between acceptance and despair, tenderness and toughness, he writes, ‘I wanted to be a physicist,’ but ‘Your kisses made me a poet.’ Mohsen Emadi is a powerful witness to life in the present times, and Standing on Earth introduces a major world poet to an English-language readership for the first time.