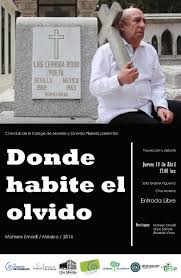 The film portrays the figure of the Spanish poet Luis Cernuda during his exile in Mexico. Through the sensitivity of the poetic language and interviews conducted with Antonio Gamoneda, James Valender, Angel Guinda, Ricardo Vinós and Eduardo Milán; as well as fragments of poems by Cernuda himself; Mohsen Emadi expresses the condition of the exiled poet, which he shares with Luis Cernuda in Mexico, both forced from the homeland by warlike conflicts, the director finds echoes of his own condition in the verses of the Spanish poet.