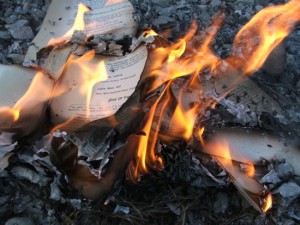 In Kabul, two days before Nowruz this year, some angry men attacked a young woman in the street. In an open space they tortured and then burned her. They said she was guilty of burning a copy of the Quran. If we accept that the woman, Farkhondeh, actually burned the holy book, it is also valid to ask: in what category of culture can the corpse of a book be exchanged with the body of human? How does a book suffer when it burns?

When the bible was written, Yahweh was still one of the strongest gods. Through history, as written culture trespassed on oral culture, this strong god among gods conquered all other gods to become the unique god. From the time that the words of god were written as the Decalogue, to the time that the Quran engraved itself on paper, oral cultures were vanishing under the feet of written emperors. The word “Quran” originally means “to read” and the commandment “Read!” was the first statement god commands Mohammed. I ask myself, what is Mohammed reading at this very first moment: the same still-unwritten book? Centuries later in Iran, clerics considered Mathnavi by Rumi to be a dirty book and if a Muslim touched it, he was supposed to wash himself with water. Again, it is valid to ask how the dirt can be transformed from the body of a book to the body of a man. In some villages of Iran, people dissolved the paper version of the poems by Abulkhair in water in order to heal their illnesses. Each sickness had a special poem by this poet as a remedy. What is the relation between the corporeality of words and the corporeality of mankind?

In the murder of Farkhondeh, I ask again, if the metaphors are killing humans? I mean the same interpretation George Lakoff used to speak of the Gulf War. Culture and language are both created by metaphors. Metaphors are not just literary devices; they are units of our thoughts. The power of masks whether in antique cultures or in postmodern movements originates in the power of metaphors. How can we surpass the power of metaphors when we are in front of a human body? In the old times, it was the task of shamans and poets to create or transform or destroy metaphors. Their goal was always to heal the sickness of language. But how poets can do it when Plato and Mohammed both banish them? When a dictator like Khomeini writes poems? When the Ottoman Empire, with a mystic foundation (around Rumi’s thought), massacres one and half million Armenians?

We are living in an age of metaphor chaos: The mask of spiritual mystic on the face of Khomeini, the mask of democracy on the face of George W. Bush, the mask of a socialist on the face of Ahmadinejad and several other masks. But what is identity itself, if it is not the transformation of masks? When religious people turn to be murderers, and religion itself is an institution of murder. When powerful advocates of democracy initiate wars, democracy is nothing but the economy of war. It is no longer valid to ask: what is the true religion? Or what is the true democracy? These questions are fundamentally wrong! But instead one must ask: How can we surpass this kind of religion and this kind of democracy? The historical answer has always been always the same: to look at the most radical reality in front of our eyes. To look at the body of a human being burnt, tortured, taken into slavery, silent, depressed without dream or desire.

Under the communist dictatorship of Czechoslovakia, Vladimir Holan, wrote, “Only poetics destroy poetry”. That is to say, only the history of poetry or the poetical destroys poetry. If the history of philosophy is a part of philosophy, or if the history of religion is a part of religion, a history of poetry can never exist. Jiří Orten, a friend of Holan, was killed six days before Prague’s ghetto opened. In the terror of that time he wrote: “My heart called out like that, being too alive,/ and it didn’t know it isn’t wanted yet by the wealth of earth, by the arms of its god,/ that nothing outside its world wants it,/ except for a song, an elegy.”

Who will sing this elegy? The one who can hear the silence is always the one who dares to be defeated. That is why few will hear it. There will be no victory! That’s where we may start, where Troy will speak out.